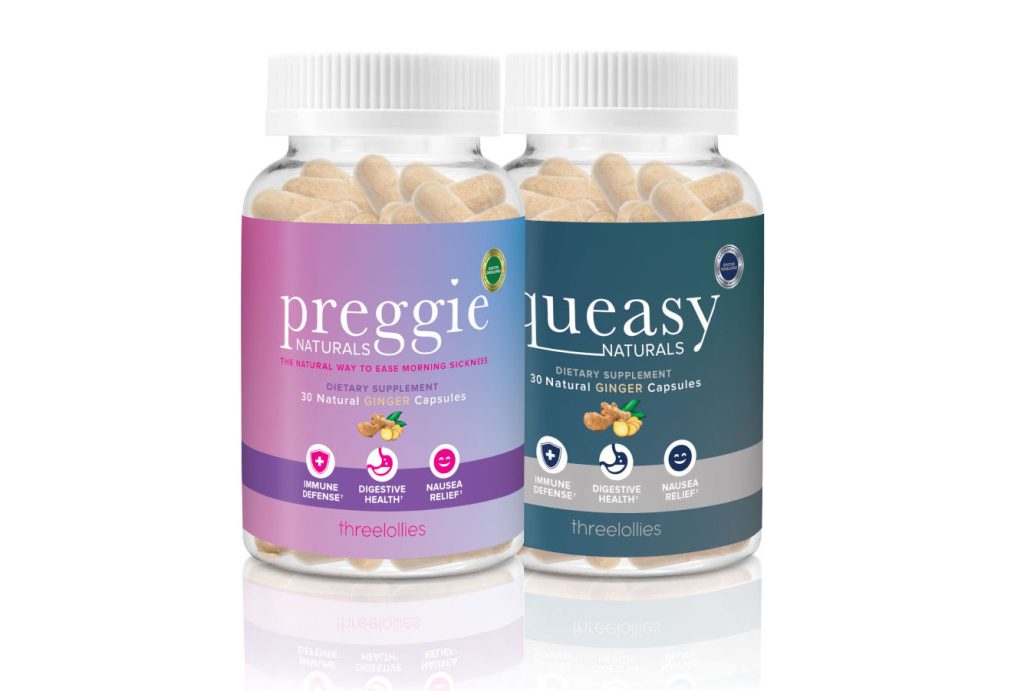 The Benefits of Ginger

Ginger, a popular spice and herbal medicine, has demonstrated medicinal effects across a wide array of diseases and conditions. It shows particular promise in treating gastrointestinal (GI) conditions such as nausea and vomiting, making it a great natural remedy for issues related to stomach upset. This article will discuss the ins and outs of ginger, and how the ginger in Queasy Naturals and Preggie Naturals can help with pregnancy symptoms, side effects of cancer treatment, and motion sickness.

Ginger, also known as Zingiber officinale is a perennial herb found in Asia and tropical regions. Its under-ground stem, referred to as the rhizome, is edible and exhibits several beneficial properties. Likewise, individuals have utilized ginger as both a spice and herbal medicine for centuries. Within the herbal medicine space, ginger can provide therapeutic benefit for gastrointestinal conditions such as nausea, vomiting, diarrhea, indigestion. Additionally, it’s been used for other ailments such as fever, muscle aches, and arthritis.

The US Food and Drug Administration places ginger on its “generally recognized as safe” list. The European Medicines Agency also concluded in an assessment that sufficient clinical evidence exists that ginger benefits nausea and vomiting. Additionally, several Western countries include ginger on its pharmacopeias. For example, the British Herbal Compendium includes ginger as a treatment for pregnancy-related vomiting1.

What evidence exists for ginger in certain conditions?

Nausea and vomiting are incredibly common in pregnancy, which as many as 80 percent of women experiencing these symptoms within their first trimester. Stomach upset can significantly affect one’s quality of life, impacting one socially, professionally, and physically. Additionally, a small portion of pregnant women may experience other health complications like electrolyte imbalances, weight loss, and dehydration as a result of nausea and vomiting. Likewise, it is important to treat appropriately. However, given the fragility of pregnancy, many individuals seek more natural solutions to morning sickness.

Several studies have evaluated the efficacy of ginger during pregnancy. One meta-analysis, for example, pooled data from six studies ranging from 1991 to 2009. Findings indicated that ginger improved symptoms of nausea and vomiting at doses of around 1,000 mg daily for at least four days compared with placebo. Another meta-analysis analyzed 1,278 pregnant women and revealed that ginger successfully minimized the intensity of nausea and vomiting versus placebo1.

Chemotherapy-induced nausea and vomiting (CINV) is an incredibly common side effect of chemotherapy, with up to 90 percent of patients experiencing it1. Typically, providers prescribe serotonin receptor antagonists (e.g., Zofran), NK1 receptor antagonists (e.g. arepitant), and/or glucocorticoids (e.g., dexamethasone) to help control nausea2. However, some individuals may seek alternative options to standard-of-care pharmaceuticals.

Several studies support ginger’s use for this indication. One trial, for example, concluded that 500 and 1,000 mg doses were effective in treating acute but not delayed nausea. When used together with other anti-nausea medications, such as arepitant, no additional benefit was seen1.

Because of ginger’s effects on nausea and vomiting during pregnancy and with CINV, one would expect additional benefit in the context of motion sickness. One study confirmed that pretreatment with ginger decreased the incidence of nausea and the time to nausea initiation in 13 individuals predisposed to motion sickness. Additionally, ginger helped to decrease recovery time after experiencing motion sickness3.

Want to save some money? Then sign up for our email list to receive coupons and exclusive savings you can’t get anywhere else.

We now have anti-nausea bands! Check out our bands with free samples.